The research work of the MICROCAN team has been awarded the “Article of the month” selection of the French Society of Biochemistry and Molecular Biology (SFBBM) for May 2022. The selected article is based on the thesis work of Dr Serena DIAZZI, under the co-supervision of Dr Sophie TARTARE-DECKERT and Dr Bernard MARI. 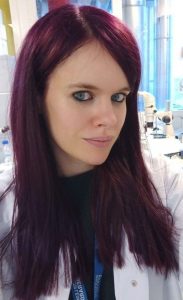 Lineage dedifferentiation toward a mesenchymal-like state displaying myofibroblast and fibrotic features is a common mechanism of adaptive and acquired resistance to targeted therapy in melanoma. Here, we show that the anti-fibrotic drug nintedanib is active to normalize the fibrous ECM network, enhance the efficacy of MAPK-targeted therapy, and delay tumor relapse in a preclinical model of melanoma. Acquisition of this resistant phenotype and its reversion by nintedanib pointed to miR-143/-145 pro-fibrotic cluster as a driver of this mesenchymal-like phenotype. Upregulation of the miR-143/-145 cluster under BRAFi/MAPKi therapy was observed in melanoma cells in vitro and in vivo and was associated with an invasive/undifferentiated profile. The 2 mature miRNAs generated from this cluster, miR-143-3p and miR-145-5p, collaborated to mediate transition toward a drug-resistant undifferentiated mesenchymal-like state by targeting Fascin actin-bundling protein 1 (FSCN1), modulating the dynamic crosstalk between the actin cytoskeleton and the ECM through the regulation of focal adhesion dynamics and mechanotransduction pathways. Our study brings insights into a novel miRNA-mediated regulatory network that contributes to non-genetic adaptive drug resistance and provides proof of principle that preventing MAPKi-induced pro-fibrotic stromal response is a viable therapeutic opportunity for patients on targeted therapy.

It may interest you